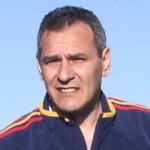 Doctor of Philosophy in Science of Sports and Physical Activity.

Master’s Degree in Psychology of Physical Activity and Sport.

Autonomous University of Madrid and the Spanish Olympic Committee. 2004 – 2006.

European Champion with the Under-19 Spain in Poznan
on July the 29th of 2006.

Spain Under-21 International Player in 5 times.

OWNER OF THE FOLLOWING